Hannah Wallace is a Pole Vaulter and track runner, and used this to connect with people in her service while in Paraguay recently, from 2017-2019. Honing her craft for over 14 years while in competitive track & field in HS and college, she was used to training but during her service she didn't have the opportunity to work out as she was accustomed, and instead ran whenever she could. 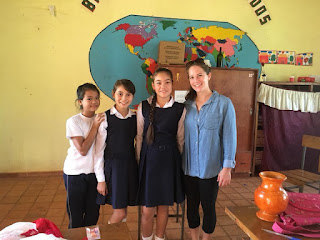 This led to her first 5k and 10k while in Paraguay!  Using bamboo, which was in abundance, she taught and encouraged students with her unique sport of pole vaulting, creating makeshift vaulting space on a soccer field the first time, and using this and a combo of running/soccer to create a Sports and Health Day Camp, also tackling diabetes prevention and NCD prevention, along with healthy diet/nutritional planning.

Due to his experience in the Peace Corps, Mike Deloge became an Ultra Runner and has continued seeking greater challenges back home in the D.C. area, realizing he could do just about anything when he put his mind to it by "taking the long view", as he learns a great deal from "perceived failures" in running & in service. He experienced coastal Colombia near Cartagena during his service, and ran "to make each day productive, even when felt I didn't accomplish much on a given day", something of a trendsetter in his rural areas of service. He later ran in the nation of Georgia as a Peace Corps Response volunteer (a short 6 month stint in an area of vital need, Georgia is a former Russian state in the Caucuses), where he took part in the "Tiblisi Marathon".
In this episode he explains what he learned from his first few 50K attempts! He also explains how running allowed him to reach more people and connect to his environment in a unique way, to better know the places he has worked and overcome obstacles he had not expected, such as slow progress in his project and many setbacks!

Tobi Hanna-Davies served in Micronesia from 1969-1971 and was a true pioneer in the early days of PC service as a teacher, she also ran/walked barefoot daily following the example of her host community children and adults. In this episode she describes her island and it's geography extensively, as being a "garden of paradise" in terms of sustainability and resources, which unfortunately has been threatened by military testing/bases and tourism in recent history. She learned to serve through teaching and how to advocate for her community, including by sharing with Americans at home what she witnessed. She continues this practice energetically today in her mid-70s, both the advocacy work and "being in touch with the ground/nature", and most days can be spotted outside her home or in her neighborhood in Kalamazoo, Michigan whether barefoot gardening, walking in marches to support equal rights for all, or playing games with local youth. In this unique vignette, she also explains some of the tumultuous times of the late 60s and early 70s along with the power of the Vietnam draft in encouraging Peace Corps recruits, as her PC stories/service experience in this episode reveal the very nature of political and military power exerted against genuinely open and giving native cultures.

Posted by The Running Anthropologist at 10:25 AM