Episode 52: Light Emerges from Darkness, and Our 2020 Run-Down

Episode 52 can be heard on most podcast apps, including Google, Spotify, Apple and Anchor!
In our last episode of 2020, we look for the light of hope just around the next bend, amidst great suffering and a year of global reckoning with the pandemic… none of us are immune and we all need an outlet. This has given the outdoor/trail and distance running community a unique perspective, if not a bitter-sweet boost. Today, Meghan and Mark discuss the theme of “emerging light from darkness” (winter solstice) across cultural traditions from around the globe, and throughout history, in the first half of the episode. In the second half of the episode, we interview Fr./Brother Anthony Aarons, a Franciscan by training and dedicated distance runner, who hails from Jamaica and applies his unique insight to his job as a chaplain. We ask him about where his drive and wisdom arise from, and to share some of his go-to sources of inspiration when encountering trials. For example, he posts Bob Marley songs at Thanksgiving and had this to say recently in his Advent message (a season of preparation for Christmas): "Advent is here! One of our Advent hymns reminds us: The Lord will come and not be slow, His footsteps cannot err. This is a good message not only for us runners (as) during Advent we want to make sure that our footsteps do not err and that we keep on the right path. Let us not procrastinate..." At the Running Anthropologist project and in our 2020 recap specifically, we try to take a reflective look at the cultures and peoples representing the diversity of our human experience, and then hone in on running and what these practices mean to us. Many of us have faced ourselves with a more sobering clarity in 2020, forced to slow down and look deeply at all our practices, often isolated from a community of support- we’ve learned much and have much to learn! We begin by considering ancient Egypt and the Nile River valley, and move to practices in the near east, Persia and Jewish practices such as Yalda and Hanukkah. We then examine the role of light festivals in pushing away darkness or leading us to a good cause, such as remarkably similar Laternfests in Germany and China, which arose completely separately from one another. Lastly, we talk about Diwali on the Indian subcontinent, and the role of a guiding light or "the light of the world" coming to join humanity in our Christmas celebrations prevalent in the West. 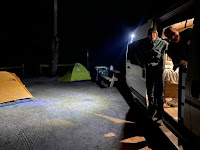 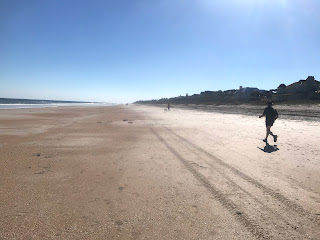 While only a tiny fraction of our communal knowledge, we share our “Top of 2020” from Running Anthropologist by category -- Audio Book: "Sacred Economics" by Charles Eisenstein; Print Book: “Epic Runs of the World” by Lonely Planet (again!); App: Insight Timer (world’s largest free meditation app -- search “Lane Holbert” under teachers to find a few of ours produced this year); Races: X-country Marathon, Half Marathon and Ultra (Alafia State Park, Florida), the Publix Atlanta Marathon (Georgia), and the Princess Challenge weekend at Walt Disney World (Meghan).
Links to all these can be found on our website, we received no sponsorship or advertising credit for anything, just things we liked and we relied upon in 2020. If you have a favorite you'd like to share out that you've found especially helpful, please do so on our Facebook page @RunningAnthropologist, or write a message in the comments here!
Credit for info sources in the podcast: "The Long Night" by Elizabeth Dias, New York Times Sunday Edition, December 20, 2020 ;  Jewish Virtual Library, "Jewish Holidays: Chanukah", https://www.jewishvirtuallibrary.org/hannukah
Ancient Egyptian Religion, https://www.ancient.eu/Egyptian_Religion/ 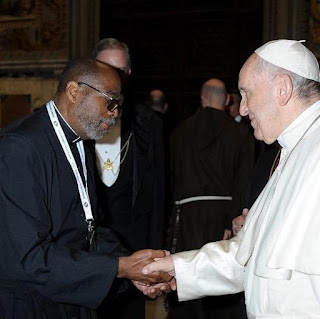 One of his most-prized moments, Fr. Anthony Meeting current Pope Francis (aside from everyday service as Chaplain of Catholic Charities)
Posted by The Running Anthropologist at 5:24 PM No comments:

Episode 51: Beth Evans, On Wheelchair Racing & The Magic of it All!

Episode 51 can be heard on most podcast apps, including Google, Spotify, Apple and Anchor! 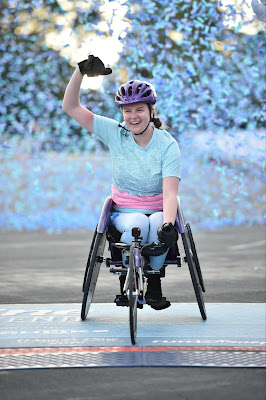 Above: Beth arrives at another victory, Disney confetti greeting as she crosses the tape. Beth is from London, it is hard to race a wheelchair around most streets and even harder during Covid. But she has some wins behind her, and some inspiration in sharing the sport with the next generation. In a few short years, she has made a name for herself in the "most magical of racing locations", that of Disney destination races. For her, it is the entire package and gives her a reason to keep training, something to look forward to around the next bend... Speaking of which, there are many bends on a track when one is training for distance events like the marathon and half marathon, which she has been doing the past year. 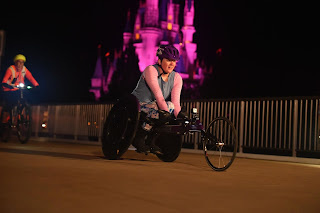 Beth shares some of her perspectives on why the sport is growing and so important to people with disabilities and rare diseases like her own that prevent her from running or doing most other sports competitively. She tells the story of her own start, and how others encouraged and inspired her, starting with witness the London 2012 Paralympics which inspired me to get my first racing wheelchair. For Beth, the terms "running", "racing" and "wheeling/wheelchair racing" are interchangeable as she connects with and understands the challenges everyone faces in training for and completing a long distance endurance event. One of her greatest hopes is that she'll be able to help spread awareness and open up events for more young racers on wheels, including smaller and regional races that might not have thought it possible. She consults with many back in Britain and appreciates the opportunity to help, even in small ways. 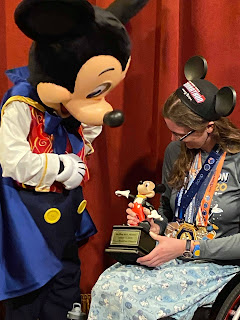 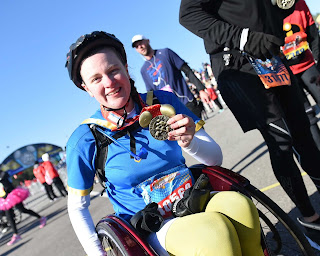 Above: Showing off recent multiple victories at a Run Disney Weekend She also recalls one of her highlights of being medaled at Buckingham Palace in the interview, as she was born and raised in London. At the age of 16 she started experiencing health problems, and 3 years later was diagnosed with the rare condition of Hereditary Spastic Paraplegia. Since she received her first racing chair, she has faced many struggles with training and anxiety around competitions, but has found her niche and now races all over her home country, but mostly participates in "Run Disney" events. In fact, she has now won half marathon titles in 3 different countries and currently has 16 champion titles at Disney alone. A trip down photo lane reveals more medals than can be held up on one neck at a given time! Most of all, she asserts, "I like to share what I have learnt on Instagram at BethsWheels to help new wheelchair racers get in to the sport at an amateur level... and spreading the joy of running at Disney!" 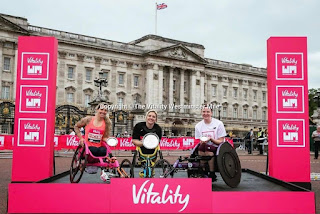 ------Outside Buckingham Palace in her home town of London, with other Champs------ Follow her on Instagram @BethsWheels and find out simple ways to support newcomers to the sport! To support us, you can also subscribe, share the episodes you love and like/visit our Facebook page @RunningAnthropologist
Posted by The Running Anthropologist at 6:51 PM No comments: