Running Anthropologist sits down with Rich Kenah (Executive Director of the Atlanta Track Club) to discuss hosting the 2020 US Olympic Marathon Trials and Publix Atlanta Marathon, the same weekend! "Running City USA" will together with the Atlanta Track Club host on Feb. 29th (leap day) 2020 for the Trials and March 1st for the Marathon. Rich has traveled to and raced in more than 30 countries, including the Sydney Olympics in 2000. One can easily see he "is a true believer in the power of this sport and its ability to change the direction of people's lives". As Exec. Director of the Atlanta Track Club (ATC) his overall mission is creating a healthier Atlanta through running and walking. He discusses organizing the world’s largest 10K – the AJC Peachtree Road Race, and how that ties into this historic Marathon weekend- namely the logistics of coordinating an entire city of staff and volunteers. By the way, with more than 115,000 participants at our events and 28,000 members, ATC is the second largest running club in the United States. 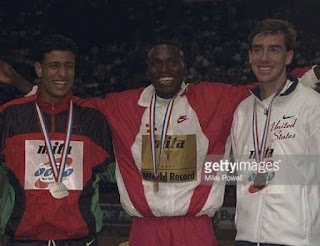 In this episode, he describes how running has had an immeasurable impact on his life, a job he gets to talk about running all day long. He also describes what it's like to qualify for the Olympics and what it's like to be a competitive runner: disappointment and injury, ups and downs, finishing his career on a very high note. For example, in 1996 when Atlanta hosted the Olympics, he missed making the U.S. Olympic Team by tenths of a second.  And those years proved to be his most productive as a professional runner, just after this loss: winning two World Championship medals, setting a world record & coming back to finally win his Olympic berth for Sydney.  He describes what it was like to be a part of the Olympic Athlete Village and walking into the Olympic Stadium wearing a USA uniform. This success, he believes, helps athletes transfer to other areas of life.  Rich was also a sports marketing professional for many years after his running career, and had many challenges in these roles as well.
It is important to note that his work and the organization in Atlanta are not just about running, but fitness in general and getting moving, in fact run/walkers and e fitness walkers are a big part of the ATC.  Rich touches on the depth of programming they offer in the interview, and desire to help young runners especially; from elementary to high school runners finding their footing. They offer everything from first-time running programs to training Olympic hopefuls.
Rich's love for the mission of ATC and fitness at the community level is incredible, as is the task of  organizing thousands of volunteers around a world class event like the US Olympic Trials and Publix Atlanta Marthon, we wish him luck and look forward to an amazing weekend! Join them online to find out all the details on the 2020 Trials, planning for upcoming events & more:
https://www.atlanta2020trials.com/
https://www.atlantatrackclub.org/
Posted by The Running Anthropologist at 2:22 PM